See that HUGE rust hole at the rear of the LF fender? That is causing me more heartache than I wanted.

First I wanted to disassemble the front clip a piece at a time.. Which was going great until I ran into the two bolts that hold the fenders at the bottom, behind the wheels..

When I tried to simply remove bolts, the captive nuts behind them of course broke free. I was really, REALLY, hoping these would just come out. Alas, they did not..

So now I am down to two choices..

1.Cut the heads of the bolts off, thereby releasing their hold on the chassis.
2.Run the cutoff wheel right below the body line, again releasing the hold of the fender to body..

I thought to myself, ‘this is only one side’ and went to the other.. I’ll save you that torment.. Suffice it to say, it is much worse.
Now I am onto pulling the front clip as an assembly.. It will make drilling the cutting the remaining nuts and bolts easier.. 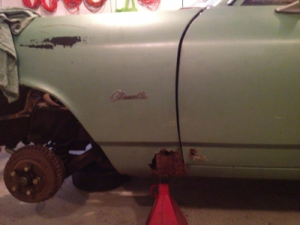 So I am continuing tearing the Chevelle down.. And I unfortunately had to put the tools away because it was time for Caiden’s nap; the impact wrench and cutoff wheel are a bit loud.

Anyway, I figured it would be a good time to take a step back and ponder the details I have not thought of.. And the first one that came to mind while looking over where I am, is the gap behind the doors.. For its day, this was the norm.. But me, I’d rather tighten this gap up, to say 1/8 inch. (remember there will be weather strips behind to door to seal the air leaks.. So this is strictly a cosmetic discussion) Closing that gap will require metal work, and a fair amount of it, I’d have to guess a good weekends worth of work.

So I ask those in my friends list, would you invest the time to make this gap a whole lot tighter? I’m thinking I will..

My wife’s cousin just posted on Facebook that I should go suicide.. It was a thought I had a one time.. But I think it’s time to revive that thought process.. I really have never seen a 68 Chevelle with suicide doors.. 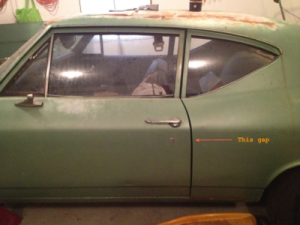